Hey! So Ive tried to open it, and it says it couldnt find the unitycrashhandler. Im on Windows btw

hi! when I try opening the app, it says it can't be opened, i'm on mac :/ i'm not sure how to fix this problem, the game looks really cute and I wanna try it out!

What did it say exactly? im on mac and it works just fine

It says "The application "MochiMadness_Mac" can't be opened."

maybe its the version of your mac like for example: "version 1.7.00" and the game can only run on different versions, you could also go to settings (System Preferences) and press security & privacy, at the bottom left theres a lock, click it and enter your info (ex: username: Kuromiku password: 123456) then go to "allow apps downloaded from:" and click "Anywhere" then click the lock again and enter your info again, that will save your changes and it might work. If it dosent retry a few times and check to make sure you saved changes.

Hi there! I was having a similar issue with running apps on my Mac. It's a Big Sur bug that is putting applications in quarantine. The instructions here fixed it for me: https://stackoverflow.com/questions/64842819/cant-run-app-because-of-permission-...

I received that message long ago on my windows and realized that it was unable to open because I did not download the itch.io app and ran it there. Why not try downloading the app and trying it out?

hello!!! hehe i enjoyed the game very much with my sister! there's just a few bugs we faced that i'd like to point out!

number one being no clear instructions on how to play ( what's the mountain n star candy for?), i have to admit that we had a lot of fun poking each other but we were quite lost to how the game actually works
another glitch is that bubble didn't work at all :( we threw it and it did nothing
there's some glitches for the ladders level where one player cant climb the ribbon/slide too, it was difficult because one of us had to finish the game when it happens since we don't know how to quit... hopefully you guys can make the quit button as esc!

otherwise the visuals and the music for this game is absolutely adorable and soothing! thank you so much for making this amazing game!

Hi! I played this game with a friend for a little bit. It's really cute and the concept is great, but there are a few glitches and some improvements to be made.

First, the glitches. On the mode with the ladders and slides (very cool idea btw), sometimes I was able to fall off of the stage and I'd be able to float around in the empty space. 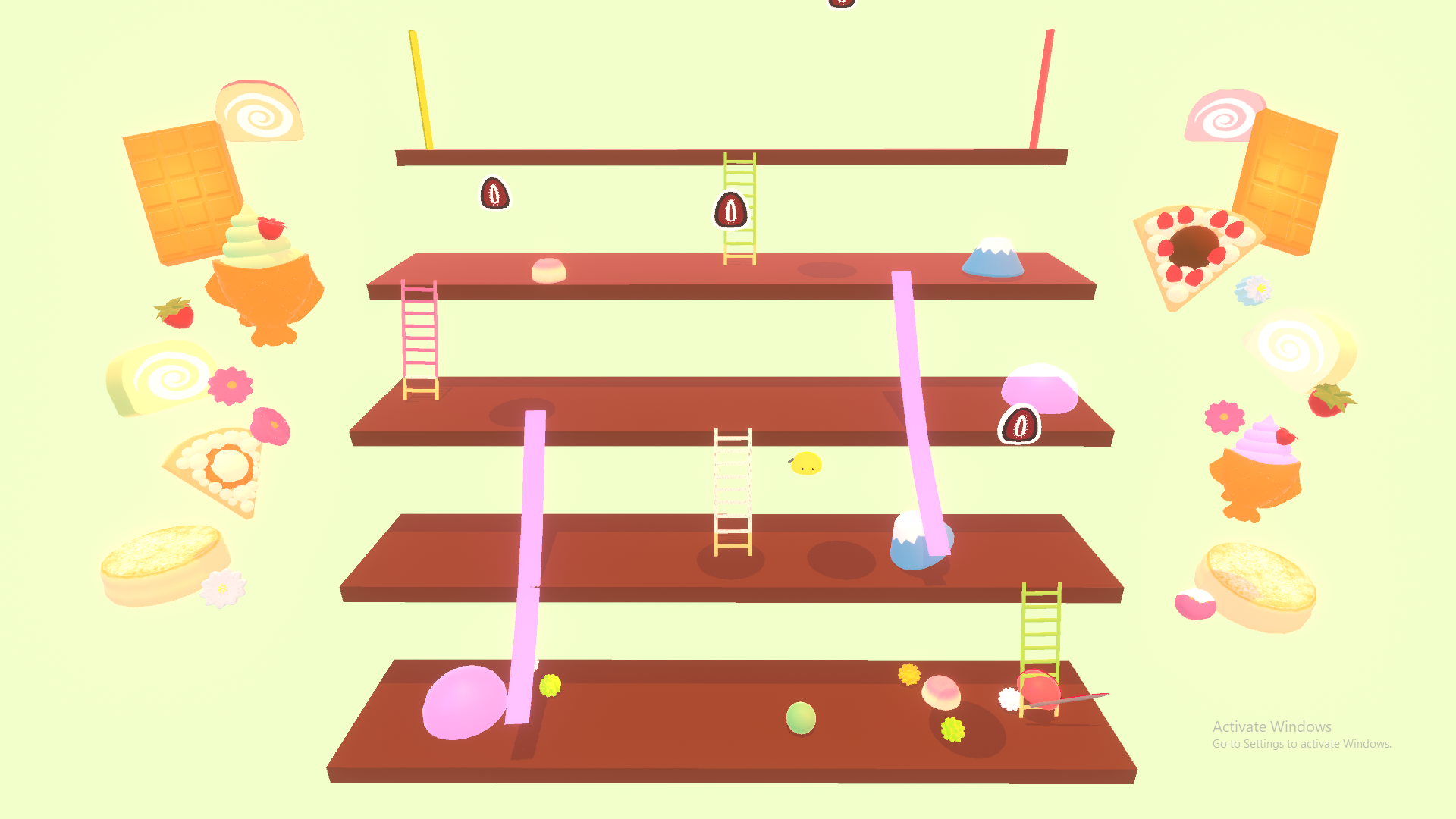 The other glitch I found was while my friend stabbed me. I was still able to move around, floating away kind of. 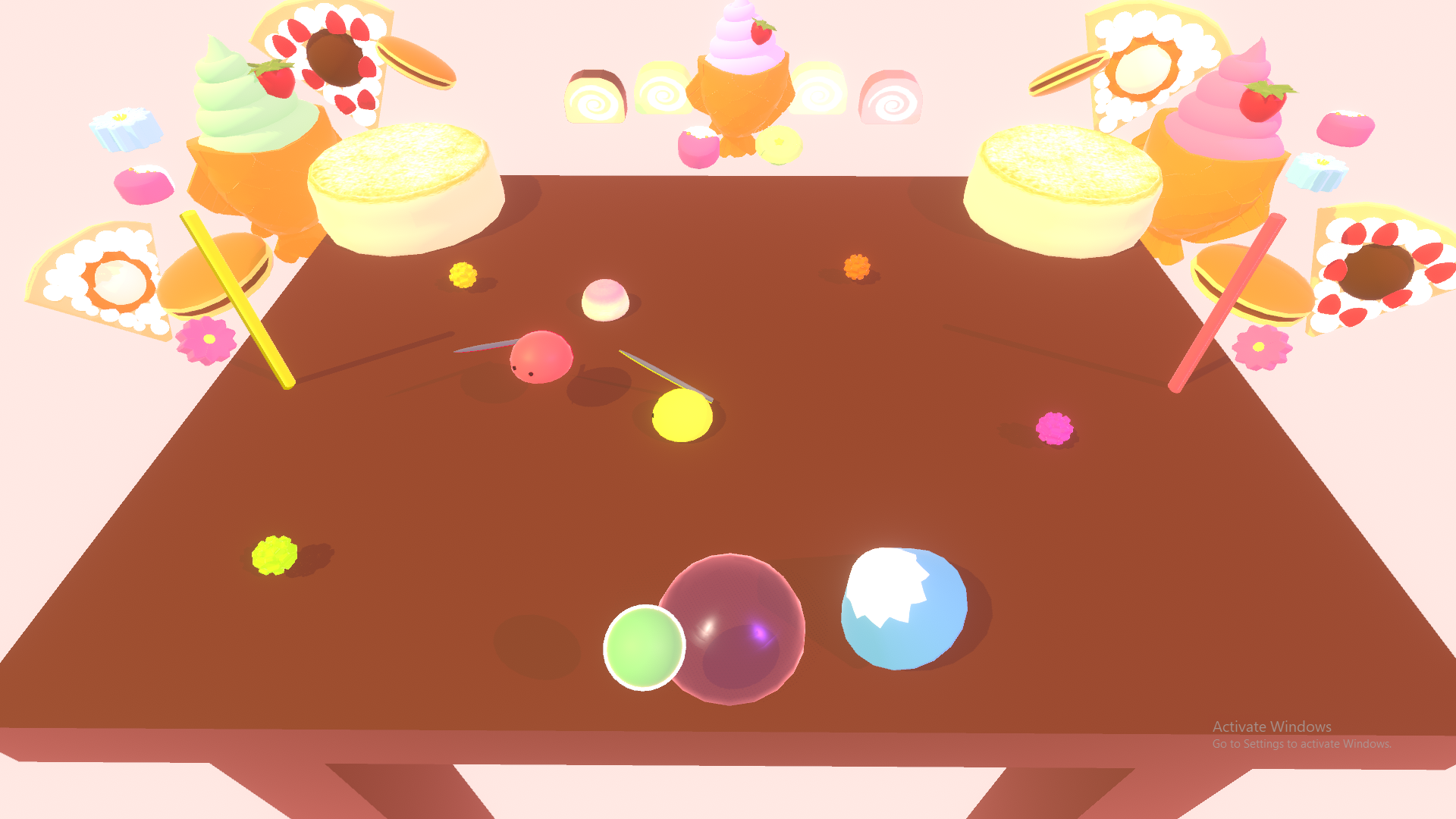 Next, I have some suggestions to make the game better. When we played, we didn't exactly know what the goal was. We knew that the game is about stabbing each other, but we didn't know how to actually win. For example, we were thinking "am I supposed to stab you three times to win?" or "are we supposed to stab each other as many times as we can under a time limit?" This can be solved by adding a rules screen or something to explain how to win.

Also, we didn't know what the items were at first. We figured out that the jelly is used to speed up who ever is on it, but it would be nice to be told what it does beforehand. The two poles on the first game mode were also misleading to me. I thought I had to stick my friend to my pole, or throw her past the pole. Depending on what you guys decide on, there should be a score indicator for each player when we do something successfully so that we know that we did something right.

Lastly, while in the game, there was no way to leave the game mode to go to a different one. We had to close the game entirely to choose a different game mode.

Anyways, I hope this helps! I'll be looking forward to an improved version of the game! Good luck!

Hello! Thank you SO so much for your extremely comprehensive feedback, we appreciate all the time and effort you put into it! For the glitches: we are aware of the ladder and slides stage having that issue, but it's a little hard for us to pinpoint where the problem points are. Do you recall any specific section where that occurred (like exiting the ladder, etc)? The second glitch is very interesting because we've not seen that before! We'll do our best to find and fix the bug.

We appreciate your suggestions a lot too! There is a quick "How to Play" screen that flashes before every stage as players enter the game, but we see how that can easily be missed. We'll try making it more obvious and/or understandable! For the items' abilities it's been interesting having a mix of people in playtests who either liked knowing what they did beforehand and figuring it out on their own as they played. As for the score indicator, we'll definitely take that into consideration!

There is actually a way to leave the game! There's a pause menu if P is pressed. We'd like to know if pressing P to do so would be intuitive to pause the game because we've been thinking of changing that to ESC or SPACE.

Again, we really appreciate your feedback!! We're glad you like it and we'll continue working on it to give you a better version!

You're welcome!! It feels nice to help out other game devs, and playing Mochi Madness was delightful :)

From what I remember, the ladder glitch would happen upon exiting. I wasn't able to just freely move off the ladder while i went up or down which is good!

I can see why people may or may not want to know about the item abilities. I guess that will be up for you guys to decide, depending on the "tone" you want your game to have, if that makes sense.

Using P to pause the game isn't uncommon! But, more people are accustomed to using ESC or Space. In my opinion, ESC makes more sense, since that button is easier to navigate to for a lot of people.

You're absolutely welcome! I'll be looking forward to it!

i like the concept but it doesn't work for me

Oh no! Please do give us more details: what doesn't work specifically?

I don't believe there is anything wrong with the game. it is just that my computer is a Mac OS and can't run files like .exe, .love, etc. without a lot of additional apps and downloads and stuff. the only thing that happens for me with this game is that a finder window opens and says the file can't be opened